The Shooting-Up-Your-Shared-Enemies Model of Trust Development 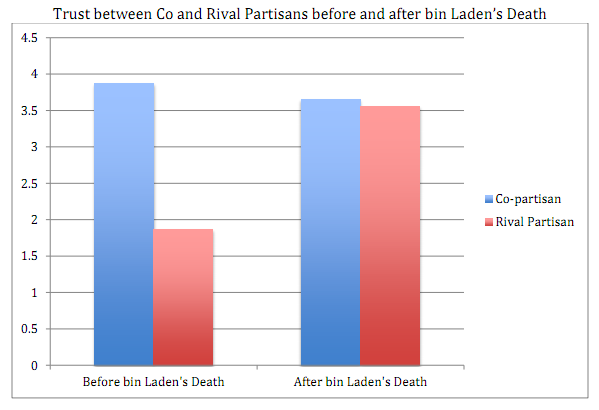 I’m not sure that the most expedient way to build trust and social capital involves Navy SEALs, but this is still an interesting little result.

Two political scientists had Republicans and Democrats play the Trust Game (a game where players pass money, the passed money is multiplied, but the original passer has to rely on their partner to share the gains).  The first time they ran the study, it was a week before the strike that killed Osama Bin Laden.   The second time, it was right after Bin Laden’s death.  As you can see above, the effect of partisan rivalry on trust disappeared.  The most obvious explanation is that the Bin Laden strike boosted (shared) national identity, which made other social categories like political affiliation less salient.

(Before anyone gets too excited about Bin Laden’s lasting effect on restored inter-partisan trust, it’s probably worth noting that the average duration of rally effects is under ten months.  And John Sides points out that gains in intragroup trust among Americans might be offset by diminished intergroup trust between Americans and others.  All in all, I’m not ready to buy the idea that a stealthed-out Black Hawk is the best tool for building social capital.)