The so-called “rental economy” (or sharing economy, or collaborative economy, or whatever you’d like to call it) is fundamentally about sharing resources.  People can now directly rent out their cars (Getaround), seats in their cars (Uberpool), clothes (Kanzee), and even rooms or apartments (AirBnB).

There are, of course, lots of models where a firm owns the resource being shared:  Hotels own rooms, Zipcar owns cars, Rent The Runway owns dresses.  But the examples I mentioned earlier are different, because individuals own the resource they are sharing.  Sharing involves risk:  If you share a designer bag with a stranger on the internet, you’ve got to believe it’ll come back in good shape.  If you use Uberpool to arrange a carpool with strangers, you want to make sure they’re not going to be axe murderers.  And, of course, if you rent out your condo on AirBnB, you want to be reasonably assured that it won’t be trashed by methheads.

So what’s the answer?  Trust, right?  On AirBnB, you get lots of information about the people you’re renting to.  You can see a picture of them, reviews from previous hosts, and even figure out if you have shared connections (perhaps you attended the same school, or have friends in common).  AirBnB advertises this to both hosts and guests:

It’s not really like a friendly-looking picture or a shared college protects means that someone isn’t a thief or a methhead.  But it gives us the confidence to proceed with a bit of risk.  And, trust tends to pay off.  We trust someone based on relatively silly things like a picture or a connection to a friend of a friend, and 99% of the time, that trust pays off.  It allows us to cooperate and do things that are risky but mutually beneficial (like sharing a condo with a stranger!) 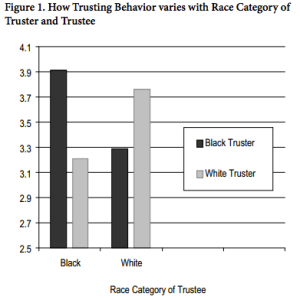 So where does that lead?  It leads to Tressie McMillan Cottom‘s experience with AirBnB, shared today on Twitter: 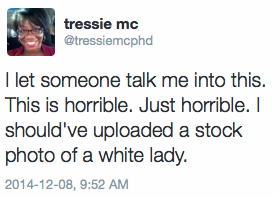 I don’t know whether AirBnB hosts use ethnic and racial similarity to guide their decisions whether to accept guests, but evidence from hiring and housing certainly suggests they will.  I would bet any amount of money that a randomized trial with Tressie’s photo versus a “stock photo of a white lady” would yield differences in reservation acceptance rates.*

Given this concern, I would take away two points.  First, of course, it’s important to note that the “sharing economy”/”rental economy” has added a new item for white folks’ invisible knapsack of privilege:  “I never have to worry if my profile picture will lead AirBnB hosts to refuse my reservation.”

But the broader issue I see is this:  The real challenge for the social economy is to create means of building trust between dissimilar people.  For rental and sharing systems to not simply reinforce and deepen homophilic trust bonds, providers like AirBnB need to build systems that create intergroup trust and help sharers trust those who are not like them.  In some ways, the sharing economy could be a place where intergroup contact happens, and we know that contact reduces prejudice.  But if trust mechanisms in the sharing economy boil down to profile pictures and social network graphs, I think it’s fair to expect the sharing economy to reproduce and exacerbate racial segregation.

* Edit:  Seems my hunch was right!  From a new working paper from Ben Edelman and colleagues:  “In a field experiment on Airbnb, we find that requests from guests with distinctively African-American names are roughly 16% less likely to be accepted than identical guests with distinctively White names. The difference persists whether the host is African American or White, male or female. The difference also persists whether the host shares the property with the guest or not, and whether the property is cheap or expensive.”